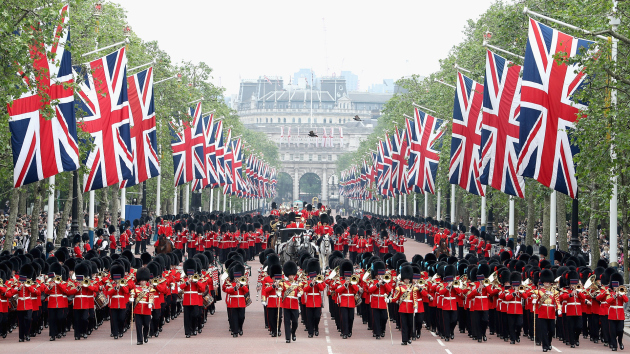 The official birthday of the Sovereign is marked each year by a military parade and march-past, known as Trooping the Colour. This takes place each June on Horse Guards Parade, Whitehall, in front of crowds of onlookers and is enjoyed by millions world-wide. The troops participating in the parade are drawn of fully trained, operational troops from the Household Division. 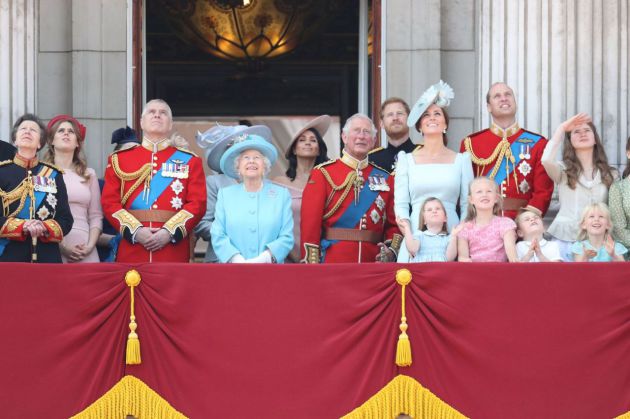 The Queen's Colour of a battalion of Foot Guards is 'trooped' (carried along the ranks) each year before the Sovereign. Only one colour can be trooped at a time, and the five Household Regiments - Grenadier, Coldstream, Scots, Irish and Welsh Guards take their turn each year.

Over 1000 officers and men are on parade, together with two hundred horses; over two hundred musicians from six bands and corps of drums march and play as one. Some 113 words of command are given by the Officer in Command of the Parade. The parade route extends from Buckingham Palace along The Mall to Horse Guards Parade, Whitehall and back again.

The ceremony derives from two old military ceremonies, Trooping the Colour and Mounting The Queen's Guard. The origin of the ceremony goes back to the early eighteenth century, and possibly even earlier when the guards and sentries for the Royal Palaces and other important buildings in the capital were mounted daily on the parade ground by the Horse Guards building.

A feature of guard mounting was for the colours of the battalion to be carried (or 'trooped') slowly down the ranks so that they could be seen and recognised by the soldiers. In 1748 it was ordered that this parade would also mark the official birthday of the Sovereign. From the accession of George IV the parade became - with the few exceptions of two World Wars and a parade cancellation in 1955 caused by a national rail strike - an annual event.