It Is easy to look upon names often immortalised in stone, in memory of those who have gone before, and feel disconnected to the lives they once led. However, it is important we take the time to scratch beneath the surface and discover the Hedge Enders who paid the ultimate sacrifice. The War Memorial which is situated at the junction of St Johns Road and Church Lane has always held great importance in the Hedge End community, so many years ago the Town Council started the ambitious task of investigating all the names listed and reaching out to anyone who could help shed light on their unknown past's.

The birth of the internet made tracing ancestry that much easier and opened up the lives of many which were once thought to be lost in time. With the additional help of the Hedge End community today we can discover Alfred, Percy and Charles. Below reveals a snapshot of three Royal Navy Serviceman entwined and destined for the same fate. 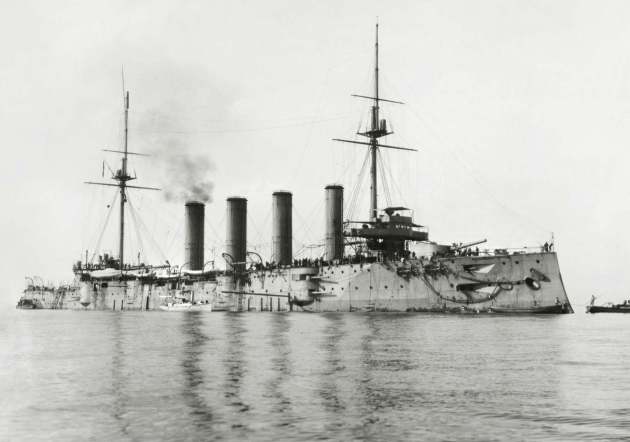 Born in Owslebury, Alfred was the second of four sons, his parents Reuben and Eliza Toogood residing at Hurst Common and his father’s occupation recorded as “Coachman”. By the 1891 Census, the family have moved to Hedge End and living in a residence described as “Barley Corn Public” and although the wording does not include “House” and none of the occupants described as being a Publican, we can only assume that this is indeed the Public House which we know today in Lower Northam Road. His father’s occupation has changed to Market Gardener. Living close-by are the Wayman family and their daughter Lily is the same age as Alfred. It would seem that they may have been childhood sweethearts as they marry in the parish of Chelsea St. Luke on 4th August 1912.

In the Census of 1901, Alfred aged 20 is a member of the crew, as Able Seaman, aboard the Royal Navy vessel Orlando, off the coast of Wusang forming part of the force attempting to relieve the British Legation in Beijing, during the Boxer Rebellion. 1911 finds Alfred living and working in London. He lives in the parish of Walthamstow with the family of his elder brother George and his wife Susan. George is the Foreman of the Cold Air Store at Smithfields Market and Alfred is a Meat Porter.

With the outbreak of World War I, Alfred returned to the Royal Navy and like his fellow Hedge Ender, Charles Shafford, served on HMS Good Hope and was killed in action during the Battle of Coronel, on 1st November 1914, he was 33. 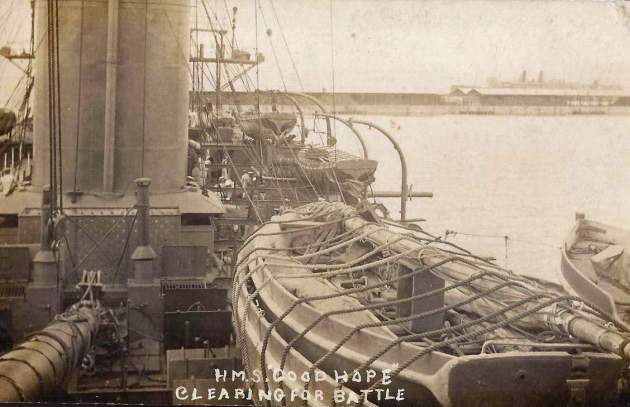 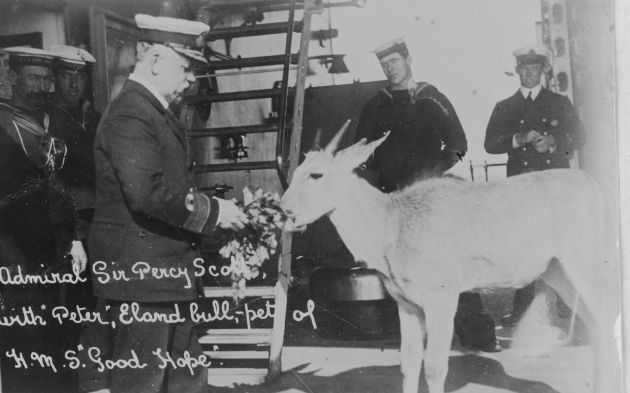 Admiral Sir Percy Scott with Peter, the Eland bull mascot of HMS 'Good Hope'. Crew members can be seen in the background.

Percy’s father Jesse Houghton is known to have been a Carpenter and Furniture Maker, who built the staircase, commissioned by Thomas Hellyar Foord for Grange House, now known as Botleigh Grange Hotel, a famous landmark of Hedge End today. His craftsmanship was so highly regarded by Thomas Hellyar Foord that he stipulated that Jesse Houghton should construct his coffin at the time of his death.

The 1911 Census records Percy as a Gunner serving in the Royal Navy on vessels in the Mediterranean.  His service record shows that he was discharged by purchase on 16th October 1912.

During WW1, Percy became a Gunner with the Royal Marine Artillery, aka the “Blue Marines” and ironically served alongside two other young men from Hedge End, Charles Shafford and Alfred Toogood on the ill-fated HMS Good Hope. He was killed in action at the Battle of Coronel off the coast of Chile on 1st November 1914, he was 27. His parents Jesse and Eliza Houghton were notified at their address Glen Villa, Pretoria Road, Hedge End. 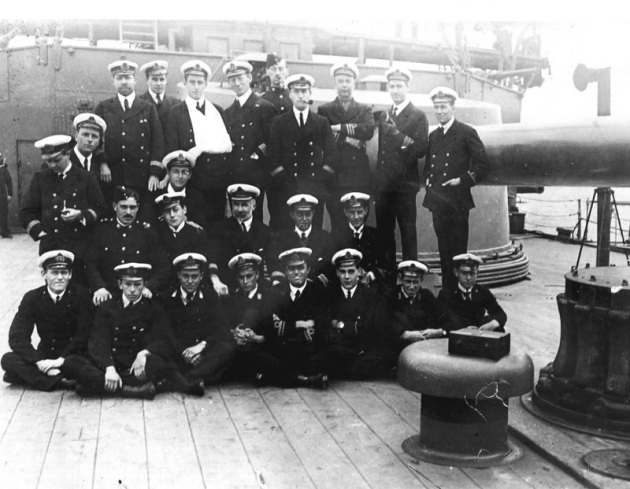 Some of the officers and midshipmen aboard HMS GOOD HOPE. Taken in the Falkland Islands on 18 Oct 1914 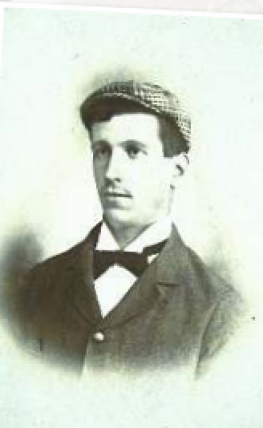 Charles Shafford was 14 years older than his brother Maurice, he married Annie Mary Earwaker on 26th December 1907 and in the 1911 Census, he records his occupation as General Labourer/Market Gardener. His address, St. Hilliers, Freegrounds Road, Hedge End.

During his service in the Royal Marine Artillery, Charles sends a postcard* to Annie, as depicted, and writes on 15th November 1913: “

Dear A, I will meet you at the Station tomorrow. I shall arrive at 1.23. I will wait for you. Had a rough week, rainey every day since Tuesday, just going to see Percy. Hope the boy is alright. From CJS. xxxxxxxxx”

Charles was a Gunner for the Royal Marine Artillery and served on HMS Good Hope. His ship was a Drake Class Armoured Cruiser which, at the time.was one of the fastest ships in the World. He was killed in action at Battle of Coronel on 1st November 1914, when during the battle, HMS Good Hope was sunk by the German armoured cruisers SMS Scharnhorst and SMS Gneisenau off the Chilean Coast. 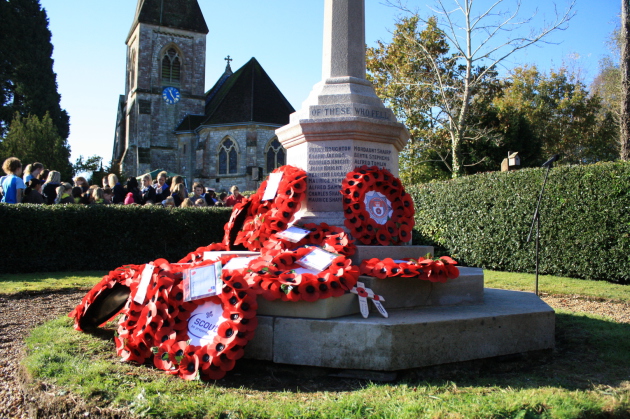 Charles Shafford and his comrades and fellow former Hedge End parishioners are all commemorated on the Hedge End War Memorial and the Portsmouth Naval Memorial on panels 2, 5 and 6.