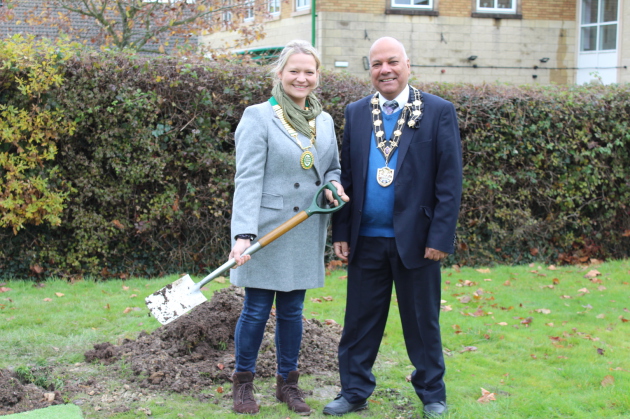 Only yesterday did it feel like we were celebrating the 100th Anniversary, first forming as a parish in 1894 and later as a Town Council in 1992. Although this year we did not dress up in the late Victorian era style of clothing like before, everyone did make a fantastic effort to celebrate the 125th milestone on Friday the 22nd of November. We had a special guest appearance from the Mayor of Eastleigh, Cllr Darshan Mann alongside the Chair of Council, Lucy Jurd who together planted a tree to commemorate the occasion. Cllr Jane Welsh very kindly donated a beautiful cake to share amongst the guests of the event, which was greatly enjoyed alongside a nice cup of tea served by locals Pat Bree and Barbara Drew.

The display showcasing the history of Hedge End was met with smiling faces by those who looked back on the early days, with the fondest of memories. For others, it was a chance to see how Hedge End has grown and to reflect on a time, where a different pace of life existed much before technology and transport as we know it.

Long-serving members of local community groups gathered to show their support, hosting stands to represent their involvement in Hedge End. We welcomed the W.I, Performing Arts Company, Flower Club and the well-known Stephen Tanti from the Hedge End book shop above the Post Office, to showcase their wares to visitors throughout the day. During the afternoon Wildern Choir sung their hearts out and brought cheer to all around the room, followed by workshops from Calligraphy expert Mary Noble and the popular arts & crafts ladies who regularly host classes at the village hall.

To close out the day’s events, Marks & Spencer kindly donated a generous gift voucher to the winner of the questionnaire, which circulated throughout the day to test everyone’s knowledge of Hedge End History. The winner was picked out of a hat and elated to have won.

The display which was created for the 125th Anniversary event will now be making its way over to the Hedge End Library where it will remain until Christmas.

Hedge End Town Council would like to thank all who participated in the 125th Anniversary and made the occasion especially memorable.